The tardigrade in the ice hole: how extreme life finds a way in the Arctic

As we make our way across Greenland’s ice sheets, I look around. We’re surrounded by numerous tiny black holes, some only a few centimeters in diameter, others up to 4-8in (10-20cm) wide. As we advance, we notice that more and more holes are magically appearing, and their edges are increasingly distinct. They’re called cryoconite holes.

Dotted across the surface of the glacier ice, these cylindrical holes are an oasis of life, the only place where life grows on polar ice caps. Despite the waters surrounding Antarctica being home to abundant life-forms, there is very little life on the landmass itself – and bear in mind it covers an immense expanse, one and a half times the size of the United States. It has the biggest freshwater reserve on the entire planet (70% of the world’s fresh water) but is anything but hospitable. Temperatures can drop to -89C (-129F), the lowest ever recorded on Earth, and winds blow – “rocket” might be more accurate – at speeds of up to 155mph (250km/h). Greenland is not that much different: all life on the island is confined to the few urban settlements along the coast.

We observe these glacial, geometric structures. Peering through the water filling them, we see something dark on the bottom. It’s cryoconite, a sludge made of dust, detritus, algae and bacteria, found not only in the Arctic and Antarctic but also in Canada, Tibet and the Himalayas. It collects in these holes because the detritus absorbs solar radiation, warming up the ice around it and causing it to melt. One of the first and most fascinating things to note about this detritus is that it’s not just from planet Earth: studies have shown that every 2lb (o.9kg) of cryoconite contains roughly 0.35 oz (10g) of sand of earthly origin and about 800 “cosmic spherules” (originating from comets, asteroids, or interstellar dust) and 200 partially molten micrometeorites. 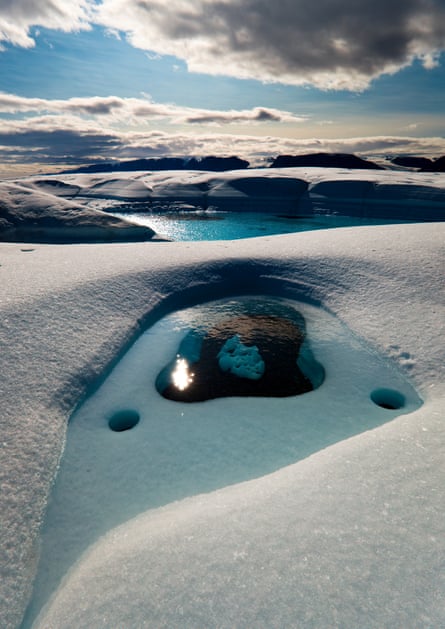 Even more spectacular is the fact that no one knew they existed until a century and a half ago. Nils Adolf Erik Nordenskiold was the first to describe them, the same man who later set sail from Gothenburg on board the Vega, reached the Bering Strait via the northern coasts of Europe and Asia, and opened the famous North-east Passage. That was back in 1870, and the geologist (he had dual Finnish and Swedish nationality) and Arctic explorer was the first to publish a detailed description of the cylindrical melt-holes he witnessed in the ice.

Peering into the hole with my nose just centimeters from it, I ponder the doggedness of nature and its ability to surprise us, from penguins that cross the Antarctic peninsula solely to lay their eggs (when they would normally never leave their food supplies on the coast) to micro-organisms like the ones I’d come across, and others with names that sound straight out of The Lord of the Rings – roundworms, or the phylum Nematoda – whose survival depends on their digging into the ice. The ability of some of the inhabitants of the melt-holes to adapt to this natural environment and evolve under such extreme conditions makes them ideal candidates for a study of extraterrestrial life.

In early 2016, in fact, a group of Japanese scientists managed to “resuscitate” two microscopic animals that had been in hibernation for more than 30 years in ice samples collected in the Antarctic. Yes, they had been in hibernation since Ronald Reagan’s day (6 November 1983, to be exact), and had “reawakened” from their long sleep on 7 May 2014, into a world of smartphones and social networks. The animals in question were Acutuncus antarcticus, a species of tardigrade – a microscopic (about 0.5mm long) creature with eight legs, four to eight claws on each leg, and an odd appearance (like a tiny mammal with its fur removed).

Tardigrades have also become a veritable internet sensation of late, nicknamed water bears or moss piglets. Why are they so popular? Because tardigrades are a bit like video game heroes – you can freeze them, boil them, crush them, starve them, and they just keep coming back to life. There’s no way to kill them! There could be no better candidate for a cryoconite hole. Water bears are one of the most fascinating creatures in the world for the way they can adapt to ultimate extreme environments. You can find them, for example, in the deepest ocean trenches or hottest deserts, on the frozen peaks of the Himalayas and in Antarctica. They have succeeded in outliving dinosaurs and are so hardy that they can survive in extraterrestrial environments in addition to boiling and freezing ones. 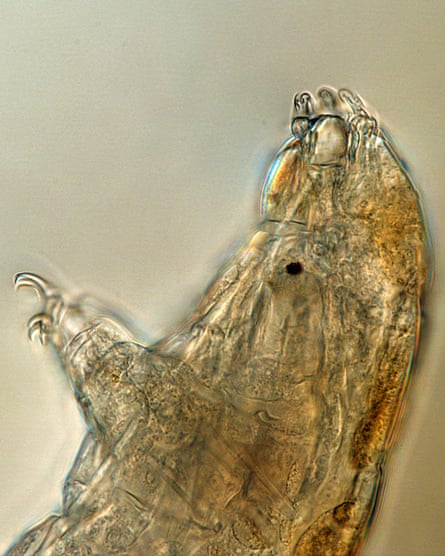 The “defrosted” animals in the Japanese experiment had managed to survive through cryptobiosis, a process that causes their metabolism to slow to 0.01% of normal function. (Imagine your heart rate going from 60 beats per minute to only one every two minutes!) During cryptobiosis, all water in the body is released and the animal rolls itself up into a tiny, indestructible ball (the water in their bodies is sometimes replaced with a sort of natural antifreeze). Getting rid of water is the main priority, as it saves them, for example, from any cell damage caused by freezing.

The Japanese scientists described another, even more surprising tardigrade characteristic. One of the two animals (after being “defrosted”) managed to reproduce. Here’s what happened: the two animals – which the research team called Sleeping Beauty 1 and Sleeping Beauty 2 (SB-1 and SB-2) – were placed in two separate wells on a Petri dish to be monitored and fed. An egg was then found as the experiment progressed. The researchers placed it in another well and called it SB-3. To each well they added agar (a jellylike substance used in molecular biology), bottled water and chlorella algae (which contains chlorophyll). The ingredients were replaced weekly. More eggs were found over the course of time, all of which hatched safely.

I direct my gaze to the bottom of the holes again, mesmerized, despite there being little to see with the naked eye. Tardigrades are not alone in the cryoconite holes. They share the habitat with other equally fascinating organisms, which is a major difference between Antarctica and Greenland. In the former, the icy dens can resist for years, coming through the seasons intact and becoming a sort of mini testing ground for extreme life. The ice cover stops the sun’s rays from reaching the bottom of the cylindrical holes, with the result that photosynthesis cannot take place.

The existence of a different kind of life from what we are familiar with depends on a process known as bacterial chemosynthesis. Unlike photosynthesis, it exploits the energy generated in chemical reactions to produce organic substances. To put it more simply: these creatures are completely autonomous and self-sufficient, living their peaceful existence in complete isolation. Based on recent studies, the environmental factors in these landscapes and in these Arctic and Antarctic territories could be considered the closest to what we believe life would be like on other planets. Glaciers, especially the polar ice caps, are among the most extreme environments on our planet, not just because of the cold and isolation, but also because of the high levels of ultraviolet radiation, making them similar to planets or icy moons.

One of these would be Mars, or other icy celestial bodies like Europa, a satellite of Jupiter. Europa (discovered by Galileo Galilei in 1610) is a little smaller than the moon and mostly made up of silicate rock with a water-ice crust. The biological microsystems found in the ice are like “natural laboratories” helping us to understand alien life-forms. This is what makes them so important to astrobiology – the branch of science that studies life (or the possibility of life) on other worlds. 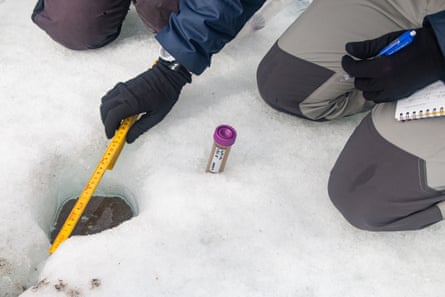 I stop for a second to contemplate the sky. When we look up at the stars at night, enchanted by the unknown universe above us, we may often wonder if there really is life up (or down) there – a form of life similar to ours. At least we know that the next time we stargaze with a scientific eye, we can draw on what we’ve learned from these monster-like creatures, the true magic of which is undoubtedly the greater secrets they are yet to reveal – secrets that bind us all together on the planet we share, floating in the dark cosmos along with billions of other creatures.

This is not my only thought, however. Cryoconite holes accelerate the rate at which the ice melts because of the dark color of the admixture inside them and the increased solar energy they absorb as a result. The curious holes have a limited life span, given the role water plays. For example, the more the ice melts, the more life inside them can proliferate – but when the glacier in which the holes have formed begins to melt, the proliferating life inside them will be swept away by the meltwater current, and the holes will disappear. This is where climate change also plays a part: the more the glaciers melt, the more difficult it will be for the cryoconite holes to survive. And the life-forms discovered within them will become ever rarer. Alternatively, it may be that the more meltwater there is, the more the holes will proliferate. The answer to this enigma is yet another mystery to be solved.