Country diary: an endearing little scrap of life darts round the garden

The young robin, speckled brown and bright of eye, perched on the fence by the compost heap. When I lifted a forkful, exposing a writhing knot of thin red worms, in a whirr of wings he darted down and with crammed beak retreated to his vantage point, dropping his dinner to foot level and pinioning it there with a long, elegant leg. He finished his repast, hopped a little closer, gave a quick wing-flutter, and peered intently down again, as though to direct my attention back to his source of food.

From a suitable distance and through a glass trained on the deep nest low down in a holly brake, I’ve been watching and whistling to this endearing little scrap of life – “pretty of note, colour and carriage”, as John Bunyan described the robin – since he and his four siblings chipped their way out of the egg a month ago. There followed a few days of brooding by the hen, with the cock flying daylong to and fro with a beak full of green caterpillars, which he’d give to his mate to feed the fledglings.

The young birds’ downy stubs of feathers rapidly transmuted to the sleeker shapes of primaries and coverts. They would respond to either parent with raucous calls and increasingly vigorous wing-flutterings. Their rate of growth was astonishing. The nest became crowded. Soon the hen too was foraging for food. 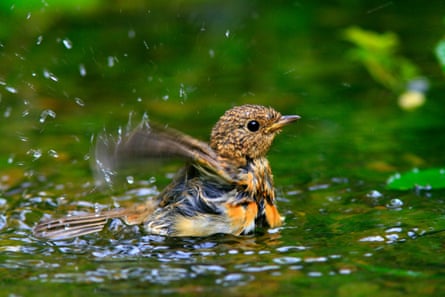 After each feeding session one or other parent would fly into next door’s garden, deposit something there and wipe its bill vigorously on twigs in the hedge. I crept in unobtrusively to see what they’d been leaving and found a cache of faecal pellets in transparent membranes, just as they had emerged from the chicks. Basic nest hygiene!

Back at the nest, the flutterings grew ever more intense, ultimately lifting the nestlings out of their place of relative safety. Soon the garden teemed with new life, already feeding itself. The parents, moulting now, departed scruffily into surrounding thickets.

My cat observes. (I’ve increased her daily rations so she’s not tempted. A robin, anyway, might give her food poisoning.) Most have dispersed. This one remains. I could tame him, but won’t. Let birds stay wild. I’ll feed him, warn off predators. The rest is down to chance. I wish him well.